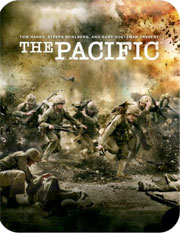 Fresh off the conclusion of the critically acclaimed 10-part miniseries, The Pacific, HBO Home Entertainment just announced that the show will make its way to DVD and Blu-Ray Disc this November.

The Pacific tracks the real-life journeys of three U.S. Marines – Robert Leckie (James Badge Dale, The Departed), Eugene Sledge (Joe Mazzello, The Sensation of Sight) and John Basilone (Jon Seda, Close to Home) – across the vast canvas of the Pacific theater during World War II.  The miniseries follows these men and their fellow Marines from their first battle with the Japanese on Guadalcanal, through the rain forests of Cape Gloucester and the strongholds of Peleliu, across the bloody sands of Iwo Jima, through the horror of  Okinawa, and finally to their triumphant but uneasy return home after V-J Day.

Both versions will contain a host of bonus materials and featurettes, such as Historical Backgrounds, the five-minute prologues that set the stage for each episode and additional historical footage narrated by Tom Hanks, and Making The Pacific, which takes you behind the scenes and take an inside look at the making of this epic, 10-part miniseries. Then there is Profiles of The Pacific, allowing you to delve into the lives of the real Marines featured in The Pacific.  Get a personal perspective on their families, their war experience and their lives after the war in these intimate portraits, while Anatomy of The Pacific War explores the historical influences and cultural perceptions that led to the merciless brutality in the Pacific theater of World War II.

The Blu-Ray version will feature a 1080p high definition transfer with DTS 5.1 HD Master Audio. In addition to the aforementioned featurettes, this version will also include The Pacific Enhanced Viewing, the ultimate viewing companion to “The Pacific.”  Learn more about the Marines and gain a deeper historical understanding of the battles while watching the miniseries with Enhanced Viewing, a 10-part, 10-hour, picture-in-picture experience.  Exclusive content includes interviews with historians and veterans, archival footage, maps and more.

This version will also offer The Pacific Field Guide, which allows viewers to navigate through the major events featured in The Pacific in this standalone, interactive Field Guide.  Search within for categories to view exclusive content including animated maps, extensive interviews with historians and veterans, historical footage, photographs and more.