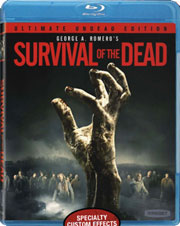 Magnolia Home Entertainment has added horror legend George A. Romero’s latest zombie movie Survival Of The Dead for release on DVD and Blu-Ray Disc in August.

Off the coast of Delaware sits the cozy Plum Island where two families are locked in a struggle for power, as it has been for generations. The O’Flynn’s, headed by patriarch Patrick O’Flynn (Kenneth Welsh) approach the zombie plague with a shoot-to-kill attitude. The Muldoons, headed by Shamus Muldoon (Richard Fitzpatrick), feel that the zombies should be quarantined and kept “alive,” in hopes that a solution will someday be found.

The O’Flynn’s, who are clearly outnumbered, are forced to exile Patrick by boat to the mainland, where he meets up with a band of soldiers, headed by Guardsman Sarge (Alan Van Sprang). They join forces and return to the island, to find that the zombie plague has fully gripped the divided community.

As the battle between humans and zombies escalates, the master filmmaker continues to reinvent the modern horror genre with wicked humor and pointed social commentary.

The DVD version offers a widescreen presentation of the film with Dolby Digital 5.1 audio and a Commentary Track by director George A. Romero.

The 2-disc Ultimate Undead Edition DVD will feature the movie with commentary also, but will also include an Introduction by Romero, as well as the Documentary ”Walking After Midnight” and the Short Film ”Sarge”.

The Blu-Ray Disc will feature a 1080p high definition transfer of the film with DTS 5.1HD Master Audio and will include all of the bonus materials found on the Ultimate Undead DVD Edition.