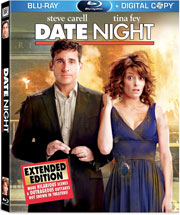 Filled with non-stop laughs and outrageous situations, Date Night follows Steve Carell (“The Office”) and Tina Fey (“30 Rock”) as a sensible, loving couple with two kids and a house in suburban New Jersey. Their typical date nights include a run-of-the-mill evening with little to no romance, but one night they decide to reignite the spark by going to Manhattan’s hottest new restaurant… without a reservation.What happens next is a wild ride that goes hilariously awry, as they embark on a dangerous series of crazy adventures to save their lives, and their marriage.

The DVD version version will contain the movie along with an Audio Commentary by Shawn Levy, as well as a Gag Reel. Also included are the Featurettes ”Extended Car Chase,” “Directing Off Camera” and ”Directing 301 with Shawn Levy”.

The Blu-Ray version, presenting the film in 1080p high definition with DTS 5.1 HD audio, will also include the Commentary Track by Shawn Levy, the Gag Reel, and the Featurettes from the DVD version. In addition, however, it will also come with Deleted and Extended Scenes and three different Public Service announcements, as well as Disaster Dates with the Cast and Steve and Tina Camera Tests. Also look for Live Lookup and a Digital Copy of hte movie on thi disc.