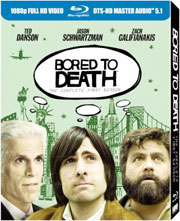 Timed just before the much anticipated premiere of the new season on HBO, HBO Home Entertainment has added Bored to Death: The Complete First Season to their line-up, bringing the TV show to DVD and Blu-Ray Disc in September.

Blending neurotic humor and noir mystery elements, “Bored to Death” follows Ames (Jonathan Schwartzman) as he solves a variety of cases  in the Big Apple – despite the fact that he’s virtually inexperienced as a private detective.  Jonathan pursues each case with gusto, though very little discretion,  abandoning all sense of reality and avoiding work on his regular writing gig and second novel.  The all-star cast also include Ames’s needy boss, George, (Ted Danson), who constantly interferes with his newfound career; as well as his best friend Ray, (Zach Galifianakis), who tries his best to advise him, while barely keeping his own life together.

The release will include Audio Commentaries on select episodes, featuring Jonathan Ames, Schwartzman, Danson and more. Also included is a selection of Deleted Scenes and The Making of Bored to Death, an exclusive look at the making of season one, featuring interviews with cast and crew as well as author Jonathan Ames. The release is rounded out by Jonathan Ames’s Brooklyn, a travel guide into one of New York City’s most popular boroughs and inside the mind of Ames via a guided a tour of the show’s eclectic locations.