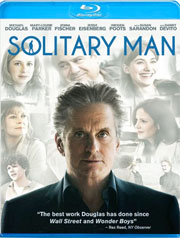 Anchor Bay Entertainment has added Solitary Man to their release line-up, bringing the film to DVD and Blu-Ray Disc in September.

Michael Douglas, as Ben Kalmen, leads a brilliant all-star cast with his “triumphant performance” (Peter Travers, Rolling Stone) in this smart and sophisticated comedy.  Ben had a thriving career, a beautiful family, and a luxury apartment in the heart of Manhattan, but the same irresistible charm that got him to the top is also the cause of his downfall.  He desperately attempts to regain his status the only way he knows how: through a woman.  But when his wandering eye turns to the wrong woman, he looks to his family, and long time friend (Danny DeVito), to help get him back on his feet again – only this time he’s got nothing to lose.

Both versions will include an Audio Commentary with Writer/Director Brian Koppelman, Director David Levien and Actor Douglas McGrath. Also included is the Featurette ”Solitary Man: Alone in a Crowd”, a behind-the-scenes look with the cast of the movie. The release is rounded out by the movie’s Theatrical Trailer.