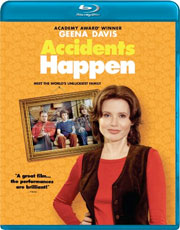 Image Entertainment has added the movie Accidents Happen to their line-up, bringing the film to DVD and Blu-Ray Disc in July.

Oscar nominee Geena Davis stars as Gloria Conway, the sharp-tongued mom in this darkly comic story of a family strangely cursed with a streak of bad luck. But as life takes unexpected detours, Gloria manages to tear apart her pain to find the humor in even the toughest things that happen to her. When her teenage son Billy uncharacteristically lets off some steam in a series of scandalous pranks, the tragic results are something no one could have predicted. But with the love of his family and some unexpected help, Billy sees the magic behind life’s oddest accidents.

The DVD and Blu-Ray version will contain the same bonus materials, including Deleted Scenes and the Featurettes ”When Accidents Happen” and ”Glorious Gloria”, as well as Sound Bites and a Trailer.