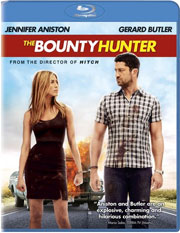 Sony Pictures Home Entertainment ran out of options and hired The Bounty Hunter, sending him on his way right to your living room in July.

Milo Boyd (Gerard Butler), a down-on-his-luck bounty hunter, gets his dream job when he is assigned to track down his bail-jumping ex-wife, reporter Nicole Hurly (Jennifer Aniston). He thinks all that’s ahead is an easy payday, but when Nicole gives him the slip so she can chase a lead on a murder cover-up, Milo realizes that nothing ever goes simply with him and Nicole. The exes continually one-up each other – until they find themselves on the run for their lives. They thought their promise to love, honor and obey was tough – staying alive is going to be a whole lot tougher.

The DVD version will feature an anamorphic widescreen version of the movie, complete with Dolby Digital 5.1 audio. As extras the release will contain Making The Bounty Hunter, Rules for Outwitting a Bounty Hunter and Stops Along The Road: Hunting Locations.