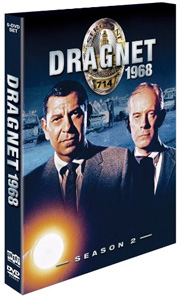 Shout! Factory has just announced a DVD version of Dragnet 1968: Season 2 to be released in July.

The community landscape is littered daily by juvenile delinquency, drug abuse, student dissidence and con-artistry but, just like that, it can all be brought to a screeching halt when Sergeant Joe Friday (Jack Webb) and officer Gannon (Harry Morgan) appear on the scene. Ladies and gentlemen, the stories you are about to see are true. Only the names have been changed to protect the innocent. This is Dragnet 1968.  Season Two features notable guest stars including Jan Michael-Vincent (Airwolf), Heather Menzies (Piranha), Juanita Moore (Imitation of Life), Barry Williams (The Brady Bunch), and Kent McCord (Adam-12), among others.

Originally conceived by Jack Webb as a radio program and then a popular NBC 1950s television series, the Dragnet series from 1967–1970 featured creator Jack Webb’s visionary cop drama in its prime – paving the way for the unforgettable hit shows Adam-12 and Emergency!.

The 6-disc DVD set will feature 28 original episodes from the show that have been carefully remastered for the best possible presentation quality. It is packed with special bonus content that includes the Dragnet 1966 Pilot Movie, vintage Dragnet 1969 Trailer, the Featurette ”Jack Webb – The Man Behind Badge 714”, plus a Commemorative Booklet.