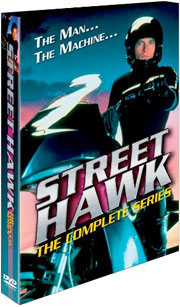 Shout! Factory has just added a 4-disc DVD set, featuring Street Hawk: The Complete Series, to their release line-up, bringing the 1985 TV show to your home in July.

Jesse Mach (Rex Smith), an ex-motorcycle cop injured in the line of duty is now a police trouble shooter. He has been recruited by a top secret government mission to ride Street Hawk, an all terrain attack motorcycle designed to fight urban crime and capable of incredible speeds of up to 300 mph and immense firepower. Only one man, Norman Tuttle knows Jess Mach’s true identity- The Man, The Machine, Street Hawk.

The release contains the Original Pilot Episode as well as all 12 Original Episodes. Further you will find the Never-before-aired Pilot on the release, featuring different Street Hawk firepower. Street Hawk, The Making of a Legend is also included, a brand new documentary featuring Rex Smith, Joe Regalbuto and Jeannie Wilson. The release is rounded out by Stills Galleries, Episode Synopsis and an 8-Page Collectors Booklet.