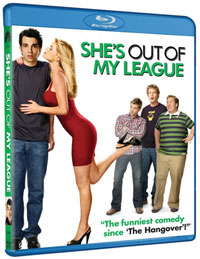 Paramount Home Entertainment has added the raunchy comedy She’s Out Of My League to their line-up, bringing the film to DVD and Blu-Ray Disc in June.

In this outrageous comedy, Kirk (Jay Baruchel, “Knocked Up”, “Tropic Thunder”), an average guy, can’t believe his luck when the successful and gorgeous babe Molly (Alice Eve, “Sex and the City 2”) falls for him. His smart-ass friends, his crazy family, and even his obnoxious ex-girlfriend are just as shocked as he is.

The DVD version features an anamorphic widescreen transfer with Dolby Digital 5.1 audio. As extras, the disc will also contain a Commentary Track by director Jim Field Smith, as well as Deleted Scenes with optional commentary by director Jim Field Smith. An Extended Endingand a Blooper Reel are also included, along with Devon’s Dating Show, a hilarious “do’s & don’ts” guide to dating for guys.

The Blu-Ray version features a 1080p high definition transfer with DTS 5.1 HD Master Audio. It will include the same bonus materials as the DVD version.