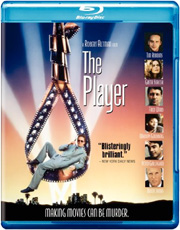 “Movies. Now more than ever!” That’s the motto of the movie studio where fast-tracking exec Griffin Bell (Tim Robbins) works. But rumor has it a power play could push Bell out. And a rejected writer who’s sending anonymous death threats could push him under. Robert Altman directs this acclaimed and satiric love/hate valentine to Hollywood, and from the bravura opening tracking shot to the spot-the-star cameos (60+!) to the inside skinny of studio life to the gleeful finale, you’re in good, knowing hands. The Player. Now more than ever!