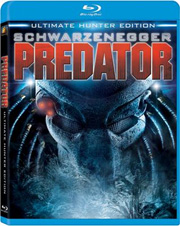 In time for the theatrical release of the latest film in the franchise, “Predators,” 20th Century Fox Home Entertainment has just added a Predator: Ultimate Hunter Edition to their line-up, bringing the film to Blu-Ray Disc in June.

Dutch (Arnold Schwarzenegger; The Terminator) wages an all-out war against an unseen enemy, a force more powerful and deadly than any on Earth-because the Predator is not of this Earth. As he leads an elite group of commandos on a rescue mission deep into the jungle, Dutch and his team quickly learn that their foe kills for pleasure and hunts for sport. However, this time….it picked the wrong man to hunt.

Sporting a brand new 1080p high definition transfer and a DTS 5.1 HD Master Audio track, this Blu-Ray version of “Predator” will also feature a large number of bonus materials, including the all-new high definition Featurette “Evolution of the Species: Hunters of Extreme Perfection”. You will also find a Commentary Track by director John McTiernan on the release, as well as a Text Commentary by Historian Eric Lichtensfeld. The Making-Of Documentary ”If It Bleeds, We Can Kill It” and ”Inside The Predator” will also be included, as well as a series of Special Effects Featurettes. Look for Deleted Scenes and Outtakes also, along with Short Takes and a Photo Gallery. The movie’s Theatrical Trailers and a Sneak Peak at “Predators” will round out the release.

The “Predator: Ultimate Hunter Edition” arrives in stores on June 29 already, with a $29.99 sticker price.