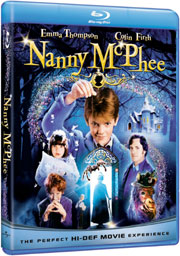 Universal Home Entertainment has just added the enchanting family movie Nanny McPhee to their line-up, bringing the film to DVD and Blu-Ray Disc in August.

In this wickedly charming tale, Emma Thompson portrays a mysterious woman with special powers who enters the household of the recently widowed Mr. Brown (Colin firth) and attempts to tame his seven very naughty children. The children have managed to drive away 17 previous nannies, but as Nanny McPhee takes control, they begin to notice that their misbehaving has magical and startling consequences. “A magical, fantastic and wonderful fable that will capture the heart of the whole family!” (Maria Salas, NBC-TV)

The DVD version will be sold separately as a widescreen and a fullframe version, each with Dolby Digital 5.1 audio. The extras on the release will include a Commentary TRack and Deleted Scenes, as well as a Gag Reel and the Featurettes ”Casting the Children,” “Village Life,” “Nanny McPhee Makeover and ”How Nanny McPhee Came to Be”.

The Blu-Ray version will feature a 1080p high definition transfer with DTS 5.1 HD Master Audio, as well as DTS tracks in a large variety of other languages. It will contain the same bonus materials as the DVD version.