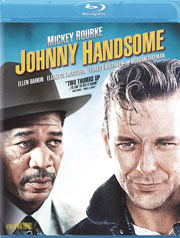 Lionsgate Home Entertainment has added a Blu-Ray version of Johnny Handsome to their schedule, releasing the film in July.

Mickey Rourke is John Sedley, a petty gangster whose facial deformities earned him the nickname “Johnny Handsome.” When Johnny and a friend are double-crossed during a robbery by two partners, his friend is killed and Johnny is sent to prison. There, a sympathetic surgeon makes a deal to give Johnny a new face – and a new shot at life. Once on the outside, Johnny discovers that staying straight isn’t easy. But his new look does open one door for Johnny – revenge. An electrifying tale from the director of 48 Hrs, this thrilling crime drama features superb performances from Rourke and costars Ellen Barkin, Elizabeth McGovern, Morgan Freeman, Lance Henriksen and Forest Whitaker.

The release features a 1080p high definition transfer of the flick,, complete with DTS 5.1 HD Master Audio. A few extras will spice up the disc, including a number of Featurettes, covering the movie’s production, locations and music..

“Johnny Handsome” will arrive in stores around the country on July 27 for $19.99.