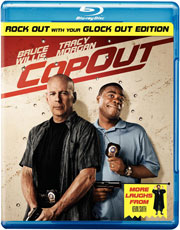 Warner Home Video has added Kevin Smith’s Cop Out to their release line-up, scheduling the film to arrive on DVD and Blu-Ray Disc in July.

Action star Bruce Willis and ace comic Tracy Morgan play bickering-but-got-your-back Brooklyn buddy cops. Kevin Smith (Clerks, Chasing Amy) directs the gritty, goofball goings-on as the guys hunt for a stolen 1952 mint-condition baseball card, a hunt plunging them into a gunslinging war with a deadly drug ring. Batter up, fans. The boys are ready to take you out to the ol’ brawl game!

The DVD version will arrive in an anamorphic widescreen version with Dolby Digital 5.1 audio. The only extra on the release will be a number of Deleted Scenes.

The Blu-Ray version features a 1080p high definition transfer with DTS 5.1 HD Master Audio. The release will also include Deleted Scenes along with a Maximum Comedy Mode featuring Kevin Smith and Seann William Scott, as well as Focus Points and Wisdom From The Shit Bandit. The DVD version of the movie will be included on this release as well as a Digital Copy.