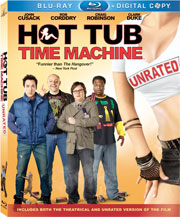 Three friends with less-than-fulfilling lives get the chance to go back and do it all again in the uproarious comedy “Hot Tub Time Machine.” The film stars John Cusack, Craig Robinson and Rob Corddry as buddies looking to recapture a little of their youthful glory by returning to the ski resort where they used to party. After a crazy night of drinking in the hot tub, they realize that they‘ve been transported back to the 80s and into the bodies of their younger selves. Now they have to decide whether they should change their futures while wading through a sea of spandex, blue eye shadow and heavy metal hair bands. Hot Tub Time Machine also features a hilarious supporting cast including comedy legend Chevy Chase, Crispin Glover and Clark Duke

Arriving as an Unrated version, the DVD version will contain an anamorphic widescreen transfer of the film with Dolby Digital 5.1 audio. As extras, the disc will also contain Deleted Scenes and the movie‘s Theatrical Trailer.

Much hotter by comparison is the 2-disc Blu-Ray version, featuring the Theatrical version, but also an Unrated Cut of the film. It is presented in 1080p high definition and supplemented by a DTS 5.1 HD Master Audio track. The release will include the Featurettes ”Production: Acting Like Idiots,” “Chevy Chase: The Nicest Guy in Hollywood,” “Totally Radical Outfits: Dayna Pink” and ”Crispin Glover: One Armed Bellhop”, as well as Deleted Scenes and a variety of Trailers and Promo Spots.. In addition, the second disc of the set will feature a Digital Copy of the unrated version of the movie.