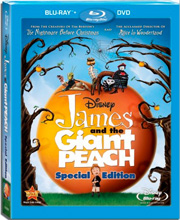 Walt Disney Entertainment has added the stop-motion film James And The Giant Peach to their release line-up, bringing the film to Blu-Ray in August.

After the daring rescue of a spider, a young boy named James gains possession of some magic crocodile tongues. When James spills them in the garden, out sprouts an enormous peach! Climbing inside, he meets an astonishing cast of characters and embarks on a magical odyssey full of thrills and adventure. Voiced by an all-star cast, including legendary actors Richard Dreyfuss, Susan Sarandon, Simon Callow and Jane Leeves, and featuring the celebrated music of Randy Newman, this classic story is delicious entertainment for the whole family!

Featuring a 1080p high definition transfer, complemented by a DTS 5.1 HD Master Audio track, the release will also include the Interactive Game ”Spike the Aunts”, inspired by the game that plays after the end movie credits, you can try your hand at spiking the evil aunts with the rhino and ring up major points!

Also included is a Production Featurette and the “Good News” Music Video performed by Randy Newman. The release is rounded out by a Still Frame Gallery and the movie’s Original Theatrical Trailer.

In addition to the Blu-Ray Disc, the release will also include the standard definition DVD version of the movie.