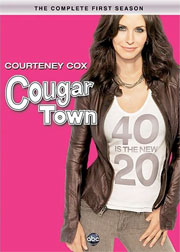 Buena Vista Home Entertainment has added the ABC TV series Cougar Town to their release line-up, bringing the First Season of the show to DVD in August.

After spending the last seventeen years as a wife and mother, recently divorced Jules (Courteney Cox) has reluctantly waded back into the dating pool and quickly finds herself in over her head. Now forty-something and single, Jules is on the hunt for love in a world filled with guys not much older than her teenage son. It doesn’t help Jules that her two best friends can hardly stand each other, her ex-husband is hanging around more now than he did during their marriage … and there’s that handsome divorced neighbor that Jules can’t quite get out of her head.

Aside from all of the show’s first season episodes, the release will include Bloopers and Deleted Scenes, as well as the Behind-the-scenes Featurette ”Taming Cougar Town”. Further you will get a look at the Ask Barb series and more.

“Cougar Town: The Complete First Season” makes its way to retail stores on August 17 for $39.99.