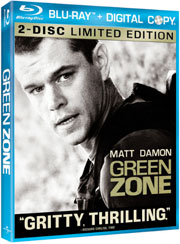 Universal Home Entertainment has just unveiled details about the upcoming release of Green Zone on DVD and Blu-Ray Disc this summer.

The DVD version will offer an anamorphic widescreen transfer of the film, complete with Dolby Digital 5.1 audio. No bonus materials have been announced for the release.

The Blu-Ray version offers up a 1080p high definition transfer of the film, complementing it with a DTS 5.1 HD Master Audio track. Similarly to the DVD version, no bonus materials have been announced for the release, but a second disc in the set will provide a Digital Copy.