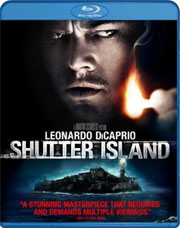 The film tells the story of two U.S. marshals investigating the mysterious disappearance of an inmate from a hospital for the criminally insane.  But as their investigation proceeds, they uncover an intricate web of deception where nothing may be as it seems.

The DVD version arrives in an anamorphic widescreen presentation with Dolby Digital 5.1 audio. Apparently, the DVD version will not contain any notable extras.

The Blu-Ray version features a 1080p high definition transfer, complemented by a DTS 5.1 HD Master Audio track. As extras the release includes the Featurette ”Behind the Shutters”, which follows the film from its inception as an acclaimed novel through the production process and to the big screen.  Includes interviews with cast and crew. Also included on the release is the Featurette ”Into the Lighthouse,” which discusses the historical landscape of psychiatric therapies during the 1950s through interviews with cast and crew.