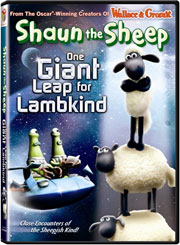 From the creators of “Wallace&Gromit” comes Shaun The Sheep and Lionsgate Home Entertainment, in conjunction with HIT Entertainment have announced a new six-episode collection called One Giant Leap for Lambkind for release in June.

Unidentified Farm Objects and paranormal sightings are the norm with Shaun the Sheep and his barnyard buddies Bitzer, Shirley and Timmy, as they encounter more madcap mischief along with those Naughty Pigs next door. Big laughs are evident, as the creators of the Academy Award®-winning Wallace & Gromit™ are out to prove that sheep-herding fun is universal.

Featuring six full-length episodes, the DVD will also contain Sing-Along With Shaun and a ”Whack-A-Pig” Game.