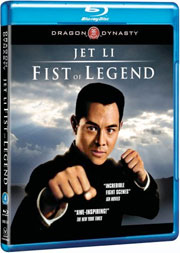 In this tribute to Bruce Lee’s classic “The Chinese Connection” (aka “Fist of Fury”), Jet Li radiates sheer power and coolness as a kung fu phenom living abroad who returns home to avenge the death of his master and save his martial arts school. Shifting effortlessly among diverse fighting styles, Li even fights blindfolded and wields his belt as a deadly weapon.

The Blu-Ray version will feature the same bunos materials as the 2-disc Collector’s Edition DVD released some time ago, including the Commentary Track by Hong Kong cinema expert Bey Logan. Also included are Deleted Scenes and a number of Featurettes taking you behind the scenes of the film.