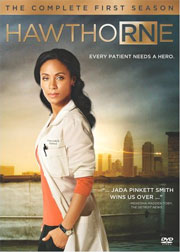 Sony Pictures Home Entertainment has added Hawthorne: The Complete First Season to their line-up bringing the TV series to DVD in June.

At Richmond Trinity Hospital, Director of Nursing Christina Hawthorne (Jada Pinkett Smith) is locked in a battle against forces far too large for any one person to handle. Whether fighting to see that a homeless woman is treated like a human being, talking a close friend and suicidal cancer patient off a ledge, accommodating the clashing egos of the hospital’s talented doctors and administrators, or managing a nursing staff of grizzled veterans and idealistic young rookies, she’s the much-needed conscience for an organization that all too often forgets whom it’s there to serve. Still learning to cope with the death of her husband and make peace with her powerful and grieving mother-in-law, Christina looks to balance her pressure cooker career with raising a smart but willful teenage girl as she tries to change a broken system, one patient at a time.

The 3-disc set will contain all 10 episodes of the show’s first season, including the pilot. Also included is a series of Featurettes, such as ”All In A Day’s Work,” a Conversation With Jada Pinkett Smith, as well as ”Inside Richmond Trinity,” “Get To Know The Cast Of HawthoRNe,” “HawthoRNe Medical School,” “Male Nurses,” “Shooting A Scene” and ”HawthoRNe’s Heroes”.