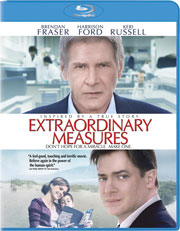 Sony Pictures Home Entertainment has added Extraordinary Measures to their line-up, scheduling the drama for release on DVD and Blu-Ray Disc in May.

The DVD Version will offer an anamorphic widescreen transfer of the movie with Dolby Digital 5.1 audio, and will also include a Behind-the-scenes Featurette with interviews of the cast and also the family whose true story inspired the film. Also include on this disc are Deleted Scenes.

The Blu-Ray version presents the film in a 1080p high definition transfer with DTS 5.1 HD Master Audio. It will include the same Featurette and Deleted Scenes as the DVD version but will also vcome with BD Live features and Sony’s movieIQ.