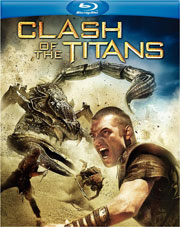 As we announced earlier this week, Warner Home Video is putting the final touch to the DVD and Blu-Ray release of the Clash Of The Titans remake. This morning we finally got more information about the upcoming release.

A remake of the 1981 cult classic, the story revolves around Zeus’ son, Perseus, and his journey to save Princess Andromeda during which he must complete various tasks set out by Zeus, including capturing Pegasus and slaying Medusa.

“Clash Of The Titans” will arrive in stores on July 27.