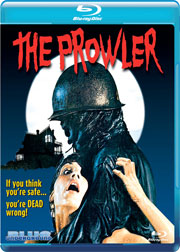 Continuing to bring their titles to Blu-Ray Disc, Blue Underground has just added The Prowler to their growing list of releases.

Avalon Bay, 1945: On the night of her graduation dance, young Rosemary and her date are brutally murdered by a prowler thought to be a jilted soldier home from the war. The killer was never found. Thirty years later, the dance is held again for the first time since that horrific evening – but something else may have also returned… Tonight, the teens of this sleepy town will meet their grisly ends at the hands – and pitchfork, blade and more – of The Prowler!

Also known as “Rosemary’s Killer,” this gruesome shocker is one of the cruelest “body-count” movies of the 1980s, thanks to razor-sharp direction by Joseph Zito and graphic gore effects by Tom Savini.