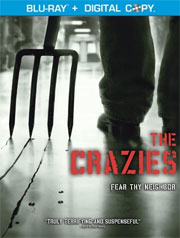 Anchor Bay Entertainment has announced a DVD and Blu-Ray Disc of the remake of The Crazies, scheduling the film for June.

When a mysterious toxin accidentally enters the water supply, one by one the townspeople fall victim to an uncontrollable urge for sadistic violence and horrific bloodshed. In an attempt to contain the epidemic, the military steps in, using deadly force to close off access into and out of town, but also abandoning the few healthy citizens to the escalating carnage. For Sheriff Dutton (Timothy Olyphant), his pregnant wife Judy (Radha Mitchell), medical assistant Becca (Danielle Panabaker) and deputy Russell (Joe Anderson), Ogden Marsh is now a bloody arena bordered by wheat fields and farms.  Unable to trust former neighbors and friends, targeted by the authorities and terrified of contracting the illness themselves, they are forced to band together, in a desperate attempt to escape both their murderous neighbors — and their government captors.

The DVD Version features an anamorphic widescreen transfer with Dolby Digital 5.1 audio. As extras you will find a Commentary Track with Director Breck Eisner on the disc, as well as a numboer of Featurettes, called ”Behind The Scenes with Director Breck Eisner,” “Paranormal Pandemics,” “The George A. Romero Template” and ”Make-up Mastermind: Rob Hall In Action”. Also included are The Crazies Motion Comic Episode 1 and The Crazies Motion Comic Episode 2, as well as Visual Effects In Motion and the movie’s Trailers, Teasers and TV Spots.. A Photo Gallery and Storyboards, as well as the film’s Screenplay will round out the release.

The Blu-Ray version will arrive in a 100p high definition transfer with a PCM 5.1 audio track, as well as a Dolby Digital 5.1 track. The disc will contain the same bonus materials as the DVD version, but will also include a Digital Copy of the movie.