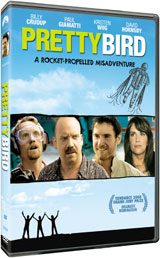 Paramount Home Entertainment has added the comedy Pretty Bird to their release line-up, releasing the movie, starring Paul Giamatti and Kristen Wiig on DVD in June.

Based on a true story, this comic tale of three would-be entrepreneurs set out to invent a rocket belt. The venturesome partnership soon takes an unhealthy toll as their mismatched personalities clash and some unexpected success lead to retaliations and kidnapping in this parable of American dreams and delusions.

No features, specs or details have been announced yet, but expect the film to arrive in stores around the country on June 29 for $22.99.