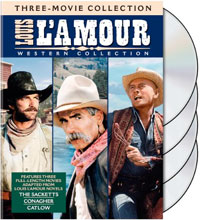 Warner Home Video has announced a DVD set featuring three of the film inspired by the Louis L’Amour Western novels.

In The Sacketts, Tom Selleck, Sam Elliott and Jeff Osterhage play brothers who migrate west to make their fortunes in cattle-herding and gold prospecting. Each aims to make it on his own – but each also stands up for the other when the going gets tough. And their guns blaze a name for themselves in untamed New Mexico territory.

Conagher is the second film of the set. He conquered the range. She conquered his heart. Sam Elliott and Katharine Ross star as a cowhand and a widowed ranch owner who are drawn to each other when ruthless rustlers threaten his livelihood and her homestead.

In Catlow, a renegade outlaw wants to pull off a gold heist but finds it hard because he’s such a wanted man – by the Mexican Army, his hellcat girlfriend, an Indian war party, a vengeful killer and several hotheaded cowpokes from his former gang. Yul Brynner, Richard Crenna and Leonard Nimoy star.

Without notable bonus materials, the 3film DVD set will be n stores on May 18 for only $19.98.