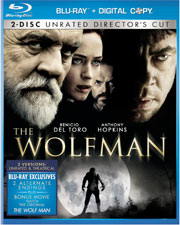 Universal Home Entertainment has just officially announced details and sepcs for the upcoming release of The Wolfman, which will come to DVD and Blu-Ray Disc in June in a variety of configurations.

Academy Award® winners Anthony Hopkins (The Silence of the Lambs) and Benicio Del Toro (Traffic) tear up the screen in this action-packed thriller. Lawrence Talbot (Del Toro) is lured back to his family estate to investigate the savage murder of his brother by a bloodthirsty beast. There, Talbot must confront his childhood demons, his estranged father (Hopkins), his brother’s grieving fiancée (Emily Blunt, The Devil Wears Prada) and a suspicious Scotland Yard Inspector (Hugo Weaving, The Matrix Trilogy). When Talbot is bitten by the creature, he becomes eternally cursed and soon discovers a fate far worse than death. Inspired by the classic Universal film that launched a legacy of horror, “The Wolfman” brings the myth of a cursed man back to its iconic origins.

On DVD, fans will have the chance to watch either the Theatrical Version of the movie, or an Unrated Cut with 16 minutes of additional footage inserted back into the film. Both versions will be included on the release in anamorphic widescreen transfer with Dolby Digital 5.1 audio. As extras, the release will also contain Deleted and Extended Scenes.

On Blu-Ray, fans will also have the choice between the Theatrical Version of the movie and the longer Unrated Cutcut, presented in 1080p high definition and complemented by a DTS 5.1 HD Master Audio track. Like the DVD version, the release will include Deleted and Extended Scenes.

Available only on Blu-Ray will be a 2-Disc Edition, which will include a host of additional materials, such as a Digital Copy of the film and a streaming-off-the-Internet version of the original, classic “The Wolf Man” starring Lon Chaney Jr.. According to Fangoria.com, you will also find a series of Featurettes, a Video Commentary Track and other bonus features on this version.