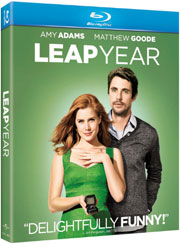 Universal Home Entertainment has added Leap Year to their release line-up, bringing the film to DVD and Blu-Ray Disc in May.

When Anna’s (Amy Adams) four-year anniversary to her boyfriend passes without an engagement ring, she decides to take matters into her own hands. Inspired by an Irish tradition that allows women to propose to men on Leap Day, Anna follows Jeremy (Adam Scott) to Dublin to propose to him. But after landing on the wrong side of Ireland, she must enlist the help of the handsome and carefree local Declan (Matthew Goode) to get her across the country. Along the way, they discover that the road to love can take you to very unexpected places.

The DVD version features the film in an anamorphic widescreen presentation, complete with a Dolby Digital 5.1 audio track. No extras will be included.

The Blu-Ray version will serve up the movie in 1080p high definition and supplement it with a DTS 5.1 HD Master Audio track. The only extras on this version will by Universal’s My Scenes feature and the pocket BLU App.