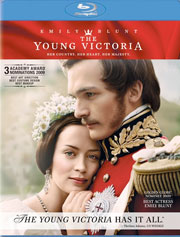 Sony Pictures Home Entertainment has announced details about the upcoming release of Young Victoria on DVD and Blu-Ray Disc this summer.

Emily Blunt and Rupert Friend star in the lavish historical drama, “The Young Victoria”. Resolved to establish her authority over those who rule in her stead, a young and inexperienced Queen Victoria (Blunt) draws strength from the love of Albert (Friend), the handsome prince who’s stolen her heart. Based on the courtship and early reign of England’s longest-serving monarch, “The Young Victoria” is a majestic tale of romance, intrigue and power.

The DVD version, featuring an anamorphic widescreen presentation will also include Deleted and Extended Scenes as well as a number of Featurettes, such as ”The Real Queen Victoria,” “Making of The Young Victoria,” “Lavish History”, which offers a look at the costumes and locations, ”The Coronation” and ”The Wedding”.

The Blu-Ray version will feature a 1080p high definition transfer with high def audio, and will include the same bonus materials as the DVD release. In addition, it will also contain movieIQ and BD-Live features for additional real-time information on the cast, music, trivia and more while watching the movie!