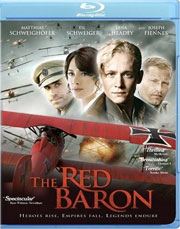 Monterey Video has a little gem in the making as they prepare a DVD and Blu-Ray Disc version of the German production The Red Baron, slated for release in June.

Europe, 1916. A living legend (aged 24) performing amazing dogfights and aerial stunts, flies in on painted wings to become famous the world over. For millions of his countrymen, he becomes an idol, a symbol of hope and pride.

Baron Manfred von Richthofen (Matthias Schweighofer) is the crack pilot of the German aerial combat forces a legend in his own time, a hero at home and a man both feared and respected by the enemy, including Allied Forces Canadian pilot, Captain Roy Brown (Joseph Fiennes). He and his fellow officers, Lieutenants Voss (Til Schweiger), Sternberg (Maxim Mehmet) and Lehmann (Hanno Koffler) see their duels in the sky as tactical, almost sportsmanlike, clever challenges that, at least at first, obscure their view of the horrors of the battlefields below. And the provocative red paint job of his Fokker aircraft earns him the nickname “The Red Baron.”

Unwittingly, he allows the German high command to manipulate his chivalrous code of honor and misuse him for propaganda purposes until the young pilot falls in love with Kate (Lena Headey), a beautiful and resolute nurse who opens his eyes to the tragic fact that there is more to war than dogfights won and adversaries downed. Baron von Richthofen finally becomes aware of his role in the propaganda machine of a senseless and barbarous war.

With a torn heart, despite the heavy losses in his squadron and his disgust for the war and his responsibility to his fighter wing, von Richthofen cannot help but fly. But even for this living legend, each new combat mission could be his last…

The DVD version offers an anamorphic widescreen presentation of the film, with Dolby Digital 5.1 audio. The release will also include a Making-Of Featurette and another Featurette called ”Legends of the Red Baron”.

The Blu-Ray version, presented in1080p high definition with high definition audio, will include the same featurettes but will also come with a Special Effects Featurette.