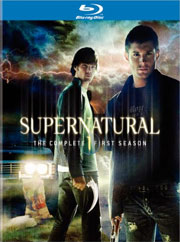 Warner Home Video is beginning to fill in back-seasons and has just added a Blu-Ray version of the First Season of Supernatural to their line-up, releasing it in June.

Sam Winchester (Jared Padalecki) grew up hunting such terrifying things. But that’s all in the past. Law school beckons him. So do safety and normalcy. That is, until Sam’s estranged brother Dean (Jensen Ackles) appears with troubling news: their father, a man who’s been hunting evil for 22 years, has disappeared. So now, to find him, the brothers must hunt what their father hunts… and Sam must return to the life he thought he’d left behind.

Featuring all 22 episodes from the show’s first season, the Blu-Ray version offers a 1080p high definition transfer with high definition audio. As extras, the release contains a Commentary Track on the Pilot by Series Creator Eric Kripke, Director David Nutter and Producer Peter Johnson, and a Commentary Track on the episode “Phantom Traveler” by Co-Stars Jared Padalecki and Jensen Ackles.

Further, the release contains Unaired and Extended Scenes, as well as The Devil’s Road Map, an Interactive Map Guide to Season One’s Urban Legends and Unusual Facts. Also, look for the Paley Festival Panel Discussion on the release, featuring the Cast and Creators, as well as the Featurettes ”Day in the Life of Jared” and ”Jensen and Supernatural: Tales from the Edge of Darkness”. A Gag Reel rounds out the release.

“Supernatural: The Complete First Season” arrives in stores on June 15 for $49.99.