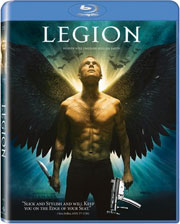 Sony Pictures Home Entertainment has added Legion to their line-up, bringing the film to DVD and Blu-Ray Disc in May.

At a remote desert truck stop, the fate of the world will be decided. Evil’s armies are amassing. Armed and united by the Archangel Michael (Paul Bettany), a group of strangers become unwitting soldiers on the frontlines of the Apocalypse. Their mission: protect a waitress and her sacred unborn child from the relentless, bloody siege of the demonic legion.

The DVD version will feature an anamorphic widescreen version of the film, accompanied by a Dolby Digital 5.1 audio track. As extras the disc will contain the three Featurettes Creating the Apocalypse, taking you behind the Physical Effects, Humanity’s Last Line of Defense examining the cast and characters, and From Pixels to Picture, a closer look at the Visual Effects.

The Blu-Ray Disc version will feature a 1080p high definition transfer with a DTS 5.1 HD Master Audio track. In addition to the bonus materials found on the DVD version, this version will also include Sony’s movieIQ Trivia Track as well as the Bringing Angels To Earth Picture-in-Picture video commentary.