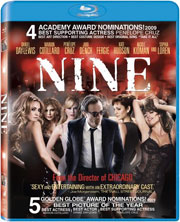 Sony Pictures Home Entertainment has added Nione to their line-up, scheduling this four time Academy Award nominated movie for release on DVD and Blu-Ray Disc in May.

Nine is a musical following a film director named Guido Contini, who is in his middle age. He is trying to complete his next film. His main problem is that he has too many women in his life. Luisa, his wife, Carla his sexy mistress, and Claudia, his muse and protege. With its incredible all-star cast, that includes Daniel Day Lewis, Marion Cotillard, Penelope Cruz, Judi Dench, Stacy “Fergie” Ferguson, Kate Hudson, Nicole Kidman and Sophia Loren, amazing performances and stunning visuals, this razzle-dazzle extravaganza will make you long to be Italian.

The DVD version features an anamorphic widescreen presentation of the film with Dolby Digital 5.1 audio. As extras, the disc will feature a Commentary Track with Director Rob Marshall and Producer John DeLuca, as well as eight Featurettes and three Music Videos.

The Blu-Ray version offers up a 1080p high definition transfer, supported by a DTS 5.1 HD Master Audio track. All the bonus materials form the DVD version will be included on the release, as well as the Interview Featurette ”Sophia Loren Remembers Cinecitta Studios” and a Screen Actors Guild Q&A. Further you will find a movieIQ Trivia Track on the release, featuring real-time information on the cast, music, trivia and more while watching the movie!