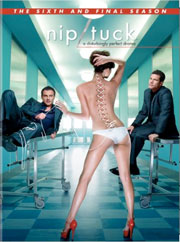 Warner Home Video has scheduled a DVD version of the sixth and final season of Nip/Tuck for release in June.

Sex. Seduction. Liposuction. Find them all in the fearless Nip/Tuck, the award-winning series that’s the scalpel’s edge of entertainment…and the spark for debate about what cosmetic surgery can or cannot bring to a patient’s life. Dylan Walsh and Julian McMahon play plastic surgeons/best friends whose glamorous South Beach practice is a revolving door for hot-button issues (including a terrifying story arc about an organ-harvest ring) and human foibles (a ventriloquist wants to look like his dummy). Guest stars include Jacqueline Bissett, Larry Hagman, Alanis Morissette, Mo’Nique, Rosie O’Donnell, Brooke Shields and more.

Arriving as a 5-disc DVD set, the release offers up all of the season’s episodes in anamorphic widescreen with Dolby Digital audio, but without extras.