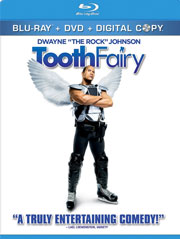 20th Century Fox Home Entertainment has just unveiled details about the upcoming release of the family comedy Tooth Fairy, bringing the film to DVD and Blu-Ray Disc in May.

Dwayne Johnson stars as Derek Thompson, one of the toughest hockey players around – until he’s sentenced to one week’s hard labor as the world’s most unlikely tooth fairy! Even though he must sport frilly wings and learn the magical tricks of the trade from his silver-winged superiors (Julie Andrews and Billy Crystal), Derek’s determined to do the job his way and prove he’s got what it takes!

The DVD version will feature an anamorphic widescreen transfer of the film with Dolby Digital 5.1 audio. As an added bonus, the release will also include the Tooth Fairy Training Center, a high-energy boot camp that will get the whole family off the couch and into the fun.

The Blu-Ray version offers up a 1080p high definition transfer with a DTS 5.1 HD Master Audio track and will also include the Tooth Fairy Training Center supplement.