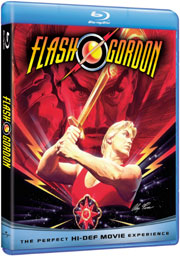 Universal Home Entertainment has added the 1980 cult version of Flash Gordon to their release line-up, bringing the film to Blu-Ray in June.

Apart from a 1080p high definition transfer with DTS 5.1 HD Master Audio, the release will also contain a number of bonus materials, such as the Featurettes ”Alex Ross, Renowned Comic Artist, On Flash Gordon” and ”Writing A Classic” in which Screenwriter Lorenzo Semple, Jr. discusses the project. Further, you will find the First Episode Of The Flash Gordon 1936 Serial on the disc along with Universal’s My Scenes and BD Live features.