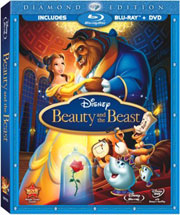 Walt Disney Home Entertainment has announced a Diamond Edition release for their animated feature Beauty And The Beast, bringing the film to Blu-Ray Disc for the first time.

Set in and around a quaint French village during the late 18th century, “Beauty and the Beast” follows the fantastic adventures of Belle, a bright and beautiful young woman who finds escape from her ordinary life, and the advances of a boorish suitor, Gaston, by reading books. Meanwhile, off in a castle in the distance, a cruel young prince is cast under the spell of an enchantress who turns him into a tormented beast, while transforming his servants into animated household objects. In order to remove the curse, the Beast must discover a true love who will return his affection before the last petal falls from an enchanted rose. When Belle’s inventor father stumbles upon the Beast’s castle and is taken prisoner, Belle comes to the rescue and agrees to take her father’s place. With the help of the castle’s enchanted staff, she sees beneath the Beast’s exterior and discovers the heart and soul of a human prince.

Arriving for the first time on home video since 2003, this high definition version will arrive on 3 discs, offering up the movie itself in a newly restored 1080p high definition transfer that presents the film in its original 1.78:1 aspect ratio, complemented by a DTS 7.1 HD Master Audio track. The Fast-Play enabled disc will also offer hours of additional viewing experiences that include Behind-the-scenes Features, Deleted Scenes, Enhanced Music Tracks, Immersive Games and a whole lot more.

Mark your calendars! “Beauty And The Beast” will arrive in high definition on October 5. A 2-disc DVD version will also arrive seven weeks later, on November 23.