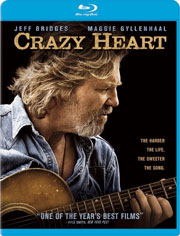 20th Century Fox Home Entertainment has added the powerful movie Crazy Heart to their release schedule, bringing the film to DVD and Blu-Ray Disc in April.

Award winner Jeff Bridges delivers the performance of a lifetime in “Crazy Heart,” the powerful story of a country music star’s rocky road to redemption. Bridges stars as Bad Blake, a boozy, broken-down singer who reaches for salvation with the help of Jean (Maggie Gyllenhaal), a journalist who discovers the real man behind the music. But will Bad’s hard-livin’ ways and crazy heart cost him his last chance at a comeback?

The DVD version will feature an anamorphic widescreen transfer of the movie with Dolby Digital audio. A selection of six Deleted Scenes and Alternate Music Cuts will be included on the disc.

The Blu-Ray version will offer up a 1080p high definition transfer with a DTS 5.1 HD Master audio track. This release will contain ten Deleted Scenes and Alternate Music Cuts, along with an Interview Featurette, starring Jeff Bridges, Maggie Gyllenhaal and Robert Duvall on “What Brought Them to Crazy Heart.” On a second disc you will find a Digital Copy of the movie.