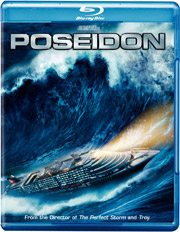 Warner Home Video has scheduled a Blu-Ray version of Wolfgang Peterson’s Poseidon for release in April.

It’s New Year’s Eve on the Poseidon. Partying voyagers toast the future. The future comes in a rush: a 150-foot rogue wave flips the cruise ship over…and a struggle to survive begins. Director Wolfgang Petersen (The Perfect Storm) returns to the sea with a thrill-packed, cutting-edge screen adaptation of Paul Gallico’s novel The Poseidon Adventure. Josh Lucas, Kurt Russell, Richard Dreyfuss, Emmy Rossum and more play passengers who must rely on each other as they seek safety through the water, flames and wreckage of an upside-down world.

The release offers a 1080p high definition transfer of the movie, complete with a DTS 5.1 HD Master Audio track. As extras the release includes the Featurette ”Poseidon: A Ship on a Soundstage” discussing the complexities of Making a Modern Adventure Movie. Also included is the Featurettes ”A Shipmate’s Diary: A Film School Intern’s Experiences on the Set” and ”Poseidon: Upside Down: A Unique Set Design Chronicle”. Further you will find the History Channel Documentary ”Rogue Waves” on the disc, exploring the Mystery of This Powerful Phenomenon of Nature.