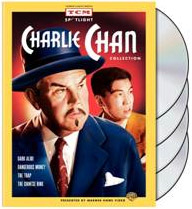 Warner Home Video has added another TCM Spotlight DVD box set to their release schedule, filling it with four films from the Charlie Chan Collection.

The DVD set will contain “Dark Alibi, ” “Dangerous Money, ” “The Trap” and “The Chinese Ring,” all newly remastered.

In “Dark Alibi,” a man condemned to death for murder insists he wasn’t at the scene of the crime.  But his fingerprints are. Charlie Chan (SIDNEY TOLER) believes him and thinks the prints were forged.  How can anyone replicate fingerprints?  Is venerable Chan about to become the laughing stock of crime solving? “What is my reputation compared to man’s life?” the sleuth says. Sidney Toler portrays Charlie Chan, the sagacious sleuth caught up in a race against time to solve the mystery before the state executes an innocent man.  Benson Fong is eager Number Three Son, Tommy (BENSON FONG).  And, as jittery Birmingham Brown (MANTAN MORELAND) joins his vaudeville partner Ben Carter in catchy, rapid-fire “incomplete-sentence” routines.

In “Dangerous Money” a voyage to Samoa becomes a murder cruise! The death of a U.S. agent searching for money and artwork stolen during World War II leaves passenger Charlie Chan (SIDNEY TOLER) with a boatload of suspects and some well intentioned but flawed help.  Number Two Son Jimmy (VICTOR SEN YOUNG) and chauffeur Chattanooga Brown (WILLIE BEST), equipped with walkie-talkies, a microscope and all manner of cleverness, aim to wrap the case quickly using their ideas of modern criminology.  “Hasty man could also drink tea with fork,” Charlie observes.  Elusive killers and amateur sleuths are no match for the methodical mastery of the inimitable Charlie Chan.

In “The Trap” can you imagine Charlie Chan in a Malibu beach house?  The master detective proves he’s at home anywhere – as long as there’s a corpse around – in this brisk mystery about hotsy-totsy showgirls who turn up stone-cold dead. Is the killer a rival showgirl?  A slick press agent?  The showgirls’ nervous boss?  A doctor with a career ending secret?  “Puzzle always deepest near the center,” Charlie notes as he closes in on the murderer.  SIDNEY TOLER makes his last appearance as Charlie Chan in this fun whodunit, joined by VICTOR SEN YOUNG as Number Two Son Jimmy Chan, MANTAN MORELAND as Birmingham Brown and as a stalwart cop, KIRK ALYN, who would soon soar into heroic adventure as the screen’s first live-action Superman.

In “The Chinese Ring” a Chinese princess is murdered in Charlie Chan’s home.  A cryptic message.  A mysterious grave.  And a missing million dollars.  Charlie Chan investigates and risks death to discover the truth.  But as he says, “Man who ride on tiger cannot dismount.”  ROLAND WINTERS makes his debut as the honorable detective in this whodunit set among the lowlifes and high-financiers of San Francisco.  Longtime Chan series stars MANTAN MORELAND (as Birmingham Brown) and VICTOR SEN YOUNG (as Chan’s Number Two Son, his name inexplicably changed from Jimmy to Tommy) join the sleuthing.  Also in the cast: PHILIP AHN, who would gain a new generation of fans decades later as Master Kan in the popular TV series “Kung Fu.”