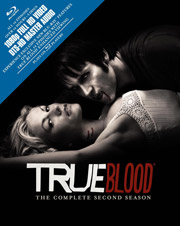 HBO Home Entertainment has just announced details about the forthcoming DVD and Blu-Ray version of True Blood: The Complete Second Season, scheduled for release in May.

When we last checked in with Sookie Stackhouse, the mystery surrounding a Bon Temps serial killer had finally been solved, to the town’sinfinite relief. Sookie is thrilled that her vampire soulmate, Bill Compton, has escaped with his life (or is it death?) after coming to her daylight defense. On other fronts, Sookie’s pal Tara Thornton sets downnew roots with an affluent benefactor, Maryann Forrester; Sam Merlotte resolves to get in shape-shift shape after a forest foray; roguish brother Jason finds new purpose with an anti-vampire sect; and detectiveAndy Bellefleur licks his wounds after being proven wrong about Jason’s guilt. But just as things are settling down, some deadly new twists threaten to ratchet up the saga of Sookie Stackhouse to bloody new heights!

The DVD version will arrive as a 5-disc set and feature an anamorphic widescreen presentation of the show with Dolby Digital 5.1 audio. It will include the Featurettes “Fellowship of the Sun: Reflections of Light,” which gives “rules to live by” from leaders Steve and Sarah Newlin, and “The Vampire Report: Special Edition,” that highlights the year’s biggest stories in vampire news, politics and pop culture, along with audio commentaries with cast and crew members.

The Blu-Ray Disc version will also arrive as a 5-disc set, featuring a 1080p high definition transfer of the show, complemented by a DTS 5.1 HD Master Audio track. It will contain the bonus materials form the DVD version along with True Blood Enhanced Viewing on all 12 episodes.  Thisfeature provides an amplified picture-in-picture experience with original, interactive content that extends the fiction of the series.