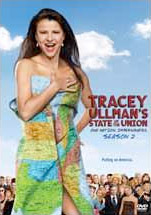 Eagle Rock Entertainment has added Tracey Ullman’s State of the Union: Season Two to their release line-up, scheduling the DVD for May.

She does an incredible 53 characters, representing one from each state (plus bonuses) … and she has help in doing it. Guest celebrities include the likes of former First Lady Laura Bush, Jodie Foster, Celine Dion, Seth Rogen and even United State Supreme Court Justice Ruth Bader Ginsburg get in on the fun.

The release will also include Deleted Scenes, a Behind-the-
scenes Featuretteas well as a Sing-Along. Further you will find a How it was done Featurette on the release and 40 minutes of Bonus Outtakes.