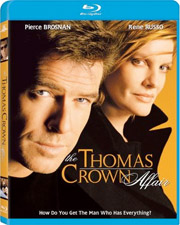 Thrill-seeking billionaire Thomas Crown (Pierce Brosnan) loves nothing more than courting disaster and winning. So when his world becomes too stiflingly safe, he pulls off his boldest stunt ever: stealing a priceless painting in broad daylight from one of Manhattan’s most heavily guarded museums. But his post-heist excitement soon pales beside an even greater challenge: Catherine Banning (Rene Russo). A beautiful insurance investigator hired to retrieve the artwork, Catherine’s every bit as intelligent, cunning and hungry for adventure as he is. And just when Thomas realizes he’s finally met his match, she skillfully leads him into a daring game of cat and mouse that’s more intoxicating and dangerous than anything either of them has ever experienced before.

Sporting a 1080p high definition transfer with DTS 5.1 HD Master Audio, like most MGM titles these days, this release will not contain any notable bonus materials.