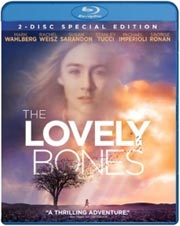 It tells the extraordinary story of one girl’s life and everything that came after, in a film that is filled with thrilling suspense, hope and the redeeming power of love. When 14-year-old Susie Salmon was murdered, she left her unfinished life behind.  But now from her place in a strange but beautiful in-between world, she must help her father catch her killer and protect her family before she can finally move on.

The DVD version will feature an anamorphic widescreen transfer of the film with Dolby Digital 5.1 audio and will not contain any bonus materials.

The Blu-Ray version will arrive as a 2-disc release offer up a 1080p high definition transfer with a DTS 5.1 HD Master audio track. An extensive 15-part Production Diary, called ”Filming the Lovely Bones” will be included on the release, hosted by Peter Jackson and Philippa Boyens that follows the film’s shoot and post-production work on the visual effects.