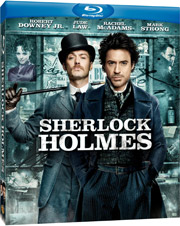 The hangman did his job, Dr. Watson declared the condemned man dead… and yet Lord Blackwood has emerged from the tomb to assert his deadly will over 1890 London. Is he in league with the forces of hell itself? Is the whole Empire in peril? It’s mystery macabre – and only Sherlock Holmes can master it.

The DVD version will feature an anamorphic widescreen transfer of the film with Dolby Digital 5.1 audio. As the only extra you will find the Featurette ”Sherlock Holmes Reinvented” on the disc, showing you how Guy Ritchie and Robert downey Jr. reinterpret the master sleuth and how Downey prepares for the role.

The Blu-Ray Disc version will feature a 1080p high definition transfer with a DTS 5.1 HD Master Audio track. As extras you will also find the Sherlock Holmes Reinvented Featurette on the disc, as well as a Video Commentary Track in which director Guy Ritchie delves into the world of Sherlock Holmes as you watch the movie. This Maximum Movie Mode feature will include Storyboard Comparisons and Stills Galleries, as well as Focus Points and Timelines.

Also included are BD Live Features and a Digital Copy of the movie.