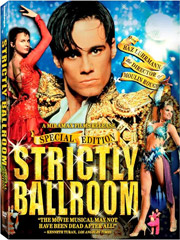 From Baz Luhrmann – the director of the award-winning hits “Romeo + Juliet” and “Moulin Rouge!” – comes the hilariously funny romantic comedy that will leave you singing, laughing and cheering for more. Experience the magical story of a championship ballroom dancer who’s breaking all the rules in a fantastic new special edition, complete with a never-before-seen bonus feature! A hit with fans and critics all across the globe, “Strictly Ballroom” will hold you tight and dance straight into your heart.

Featuring an anamorphic widescreen transfer of the movie with Dolby Digital 5.1 audio, the release will also include a new and exclusive Documentary called Strictly Ballroom: From Stage to Screen”, featuring Baz Luhrmann and his close collaborators discussing the extraordinary journey of the film.

The release will be rounded out by the Dance Featurette ”Samba To Slow Fox”.