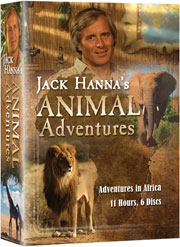 Questar has just announced the release of Jack Hanna’s Animal Adventures: Africa, a journey through Jack’s most exciting explorations across the African continent.

“Jack Hanna’s Animal Adventures” was produced from 1993-2008, and is still running in syndication in markets throughout the USA. Every episode of the widely-beloved educational and nature program is hosted by the inimitable Hanna, and features him in exotic locales around the world. Some of his most exciting and interesting adventures are the ones filmed in Africa. The release of this DVD set collects all of Jack’s best Africa shows.

The shows on this color corrected and remastered 6-disc DVD set mark the first time Jack Hanna’s shows have ever been available on DVD and will include 34 episodes from the 16-season series.